Since the early 2000s, it was apparent that the Hawkes Bay’s Maraetotara Awa had become degraded and the community needed to do something to restore the river habitat and water quality. The Maraetotara Tree Trust was established in 2002 to meet this need and has ‘worked with the willing’ ever since, building a membership of volunteers. Almost twenty years later, the community can see the effects of work on the river, and landowners are increasingly supportive of the project.

Maraetotara Awa originates from a spring at 520 metres on a high plateau near Hastings, and flows into the sea 43 kilometres later, at Te Awanga on the eastern coast. The catchment encompasses an area of about 150 square kilometres and the landscape is dominated by sheep and cattle farming, with little forestry and no dairying. However, there are native bush remnants scattered across the catchment, mainly in gorges but also on the high plateau in the hinterland.

The river is of modest size, with the flow averaging about 700 litres/sec in the lower reaches. Near the coast it becomes slow flowing and has developed ox-bows and a lagoon in the immediate vicinity of Te Awanga township.

Maraetotara Awa is close to the urban centres of Hastings and Napier and contains features, such as the Maraetotara Falls swimming area and the lagoon at Te Awanga, that are much used by the local community. In its mid-reaches, the river is home to brown trout and eels and is renowned for its fly fishing. And near the mouth of the river there is an extensive inanga spawning ground, one of the few in Hawke’s Bay that are prospering.

Twenty years ago the river had problems that included crack willow infestation, regular flooding of contiguous farmland, degrading water quality and livestock access throughout its length. These concerns were the catalyst for a local group forming the Maraetotara Tree Trust (MTT) in 2002.

The MTT worked hard from the outset to build strong relationships with landowners, the local Councils, DOC and the Million Metres Streams Project, gaining valuable support. Iwi collaboration and input has increased over time and it is likely there will be greater traction in giving effect to Te Mana o te Wai in the future years. 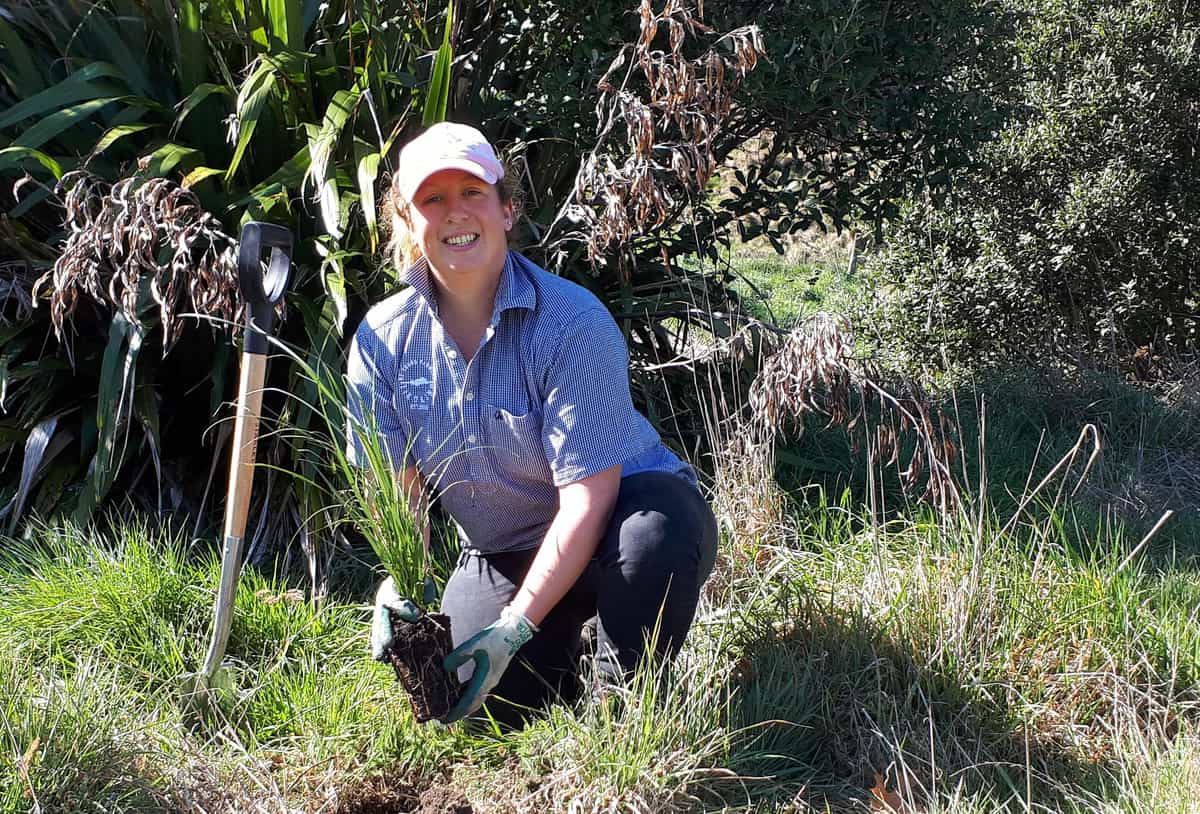 Image: Volunteer Alice Anderson plants on the banks of the Maraetotara River. The MTT’s core objective was to return the river as near as possible to its original condition, prior to the advent of farming in the catchment. Beneath this overarching objective there were a set of goals including to:

Actions taken include fencing and planting riparian strips of suitable sedges, flax and native trees along the river’s edge. Annually, an area of 2.5 hectares is planted, absorbing 10,000 trees and flaxes. The Hawkes Bay Regional Council removes the willows from the riverbanks, helps with the fencing and, more latterly, has required landowners to prepare erosion control plans in conjunction with the Council.

The Trust has provided labour to facilitate the planting and maintenance of the trees. In the early phases of their efforts the Trust grew its own trees, but as their activity has increased they’ve now begun to purchase plants to keep up with demand.

The Trust attributes much of the positive progress to landowner actions which have included:

Initially the Trust was focused on the river itself, but over the years it has broadened its effort to include education and outreach activities like upskilling rangatahi. The Trust’s planting coordinator and trustee, Kepa Toa, is associated with the Omahu Marae and has been active in involving tangata whenua youth in work schemes on the river.

The Trust has been monitoring water quality on a quarterly basis for the past fifteen months at ten sites spaced along the length of the river. While the Trust has not carried out extensive monitoring activities within the catchment, they have taken note of Hawkes Bay Regional Councils State of the Environment Report in 2009 which indicated that there were good-to-excellent habitat values for areas that the Trust had planted.

There has been anecdotal evidence from farmers of improved water quality and reduced surface flooding in areas that were previously prone to it.

A Trust member who is a freshwater biologist has done some analysis of water quality data to understand why some indicators are problematic and to inform future remedial action.

The Trust has recently-established an enhanced water sampling regime at multiple sites on the river to identify sources of contaminants to enable them to better direct their future actions. The New Zealand River Awards judges have commended the Maraetotara Tree Trust for their efforts to plant and fence in the catchment area, as these are significant and important steps towards restoring river health. The judges encourage the Trust to broaden its vision in future to incorporate innovative approaches and actions that take a wider view of river health.

The Trust’s current focus on water quality results is good, as some indicators are problematic and suggest that action beyond planting and fencing is required to address them.