For generations, Pāpāwai-Mangarara Stream in Wairarapa was a wonderful playground and source of food and water for mana whenua. However, in recent decades the Stream, once bordered by native bush, has become choked by uncontrolled willow and blackberry growth, and the water increasingly degraded by modern practices: de-forestation, livestock farming, wastewater discharge, and diverted surface water run-off. The Pāpāwai Community Trust Stream Restoration Project formed in mid-2005 with the goal of restoring the mauri (life-force) of the awa.

Waiōhine Awa, flowing from the base of the Tararua Ranges in the Wairarapa is the source of the Pāpāwai-Mangarara stream.

From its source, the water of the Waiōhine disappears underground, through purifying gravels, and emerges as a series of springs east of Greytown, Wairarapa. A number of these springs bubble-up between the Pāpāwai Road culvert and the Fabian Road culvert to form a meandering course, which flows vaguely parallel to Pāpāwai Road before joining the Ruamahanga River.

Over 80% of the water in the Pāpāwai-Mangarara Stream is derived from this underground source, the remainder is assumed to come from surface water.

The importance and origin of the Stream lives in its name. Papa, earth, derives from Papatuanuku – earth mother and giver of life, and wai meaning water. The Stream is one of many waterways that used to connect the first Wairarapa settlements.

The revered Te Whatahoro Jury (Tohunga, Ngāti Moe) used the metaphor ‘mother’s milk’ in reference to the water that flowed from the Tararua Ranges into the flat Wairarapa plains:

“Ko Mangarara, ko Waiōhine ēnei, he waiū tuku mai i Tararua maunga hei ora mō te iwi,” (These are Mangarara and Waiōhine, milk from Mount Tararua for the survival of the people).

For generations the Stream was a wonderful playground and source of food and water for mana whenua. Tuna (eel), kōkopu (native fish), and kōura (fresh water crayfish) could be found in abundance.

Pāpāwai Marae, stationed on the edge of the Stream, was historically the site of the only Māori government in Aotearoa, and in days gone by, supported a population of 3,000 people.

Of particular concern to the Care Group is the preservation of tuna kuwharuwharu (the longfin eel). Endemic to this country, the longfin eel is facing extinction due in large part to commercial fishing, loss of habitat and water degradation. Without intervention in the health of our streams where the species still resides, this fascinating creature will be lost to the world forever.

The ambition is to see the return of a thriving ecosystem with native fish and invertebrates that were historically present.

The hope is that the Stream will once again be an attractive place for people to connect with their natural environment  – to swim and enjoy the beauty that was once so treasured.

The aim of the Stream Care Group is to restore the mauri (life force) of the Pāpāwai-Mangarara Stream. This objective includes the health of connected waterways, groundwater, stream life and other plants, animals, and people. Image: The upper Pāpāwai-Mangarara Stream, looking towards the Tararua Ranges. Image: Volunteers help with the construction of a path behind Pāpāwai Marae. 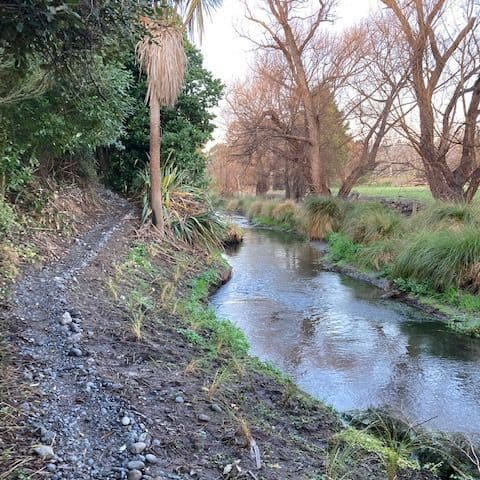 In collaboration with landowners and local schools, the Care Group has planted thousands of trees over the past 15 years, removed tonnes of unchecked willow, and organised hundreds of metres of fencing along the edge of the stream.

In June 2009 the Stream Care Group had a professional study of the area undertaken and a plan drawn up detailing how best the above objectives could be achieved.

Fencing to keep livestock out of the waterway, removing invasive willow, and riparian planting are the three primary focuses of the Care Group.

These measures require collaboration with landowners – farmers, residential landowners, and mana whenua – at every step, but they are tangible and proven methods to improve water health.

While monitoring is in place for water-take from the Stream, the New Zealand River Awards judges note that the entry doesn’t talk about water quality monitoring or results or demonstrate quantitative evidence of improvement.

However, judges agree with the Care Group’s assessment that the actions taken to date are likely to have a measurable impact in future, and as such, implementing monitoring is a critical first step towards demonstrating impact.

The judges were pleased to hear that the Care Group hopes to measure the changes of the health of the Stream with training based on NIWA’s Stream Health Monitoring and Assessment Kit.

The training covers testing for nitrate and phosphate, E. Coli, and micro-invertebrates.

The Trust’s focus to date is on planting, removing willow and fencing. It has also put in a pathway alongside the river to facilitate further planting and weed control, as well as to enable visitors to the Marae to wander along the banks and observe the tuna swimming. The strength of this entry is the community input and the ‘on-the-ground’ support.

A stream restoration plan was prepared in 2009, which enabled the group to focus their energy. The judges note that funding and support would have helped the group make more progress towards delivering on their riparian planting plan.

Overall, the judges commend this project for being an excellent example of community engagement and ownership of freshwater health issues within a catchment.