New Zealand’s shellfish aquaculture industry is at an interesting intersection – there is huge enthusiasm and optimism about the industry’s future potential, and at the same time there are mounting environmental pressures that threaten both the health of Aotearoa New Zealand’s wild shellfish stock and farmed populations of shellfish.

Although there are many environmental stressors that can affect shellfish health, and their individual and collective effects are being studied by aquaculture scientists at Cawthron Institute and collaborating research institutions across New Zealand, most are connected to, and compounded by, the greater overarching pressure of climate change.

The latest IPCC 6th Assessment Report on Climate Change 2021 makes for sobering reading. It outlines a grim future where we are already committed to at least 1.5°C of warming by the year 2100 and that is in a best-case scenario that assumes we make immediate and drastic efforts to reduce emissions. 1.5°C may not sound like much, but even under this best-case scenario we have committed our oceans to more frequent marine heatwaves and increasingly warm summer sea-surface temperatures.

Clearly no matter what we do in terms of global CO2 emissions, we need a roadmap for the future to ensure that we have a climate-resilient aquaculture industry.

In addition to being a great economic opportunity for New Zealand, the growth of shellfish aquaculture in New Zealand and worldwide is desirable because it holds great potential as a low-carbon, sustainable source of food production.

The New Zealand Government Aquaculture Strategy sets ambitious targets for future growth that the Cawthron Institute is committed to achieving if not surpassing, if there is continued and increased investment in research that will enable these targets to be met in spite of the environmental challenges we will face.

Within the Cawthron Institute’s Aquaculture Group, a major research focus has been to develop programmes of research through the MBIE-funded Shellfish Aquaculture Platform that support this objective, by examining the causes and effects of climate-change related environment stressors and their interactions with other stressors like contaminants. 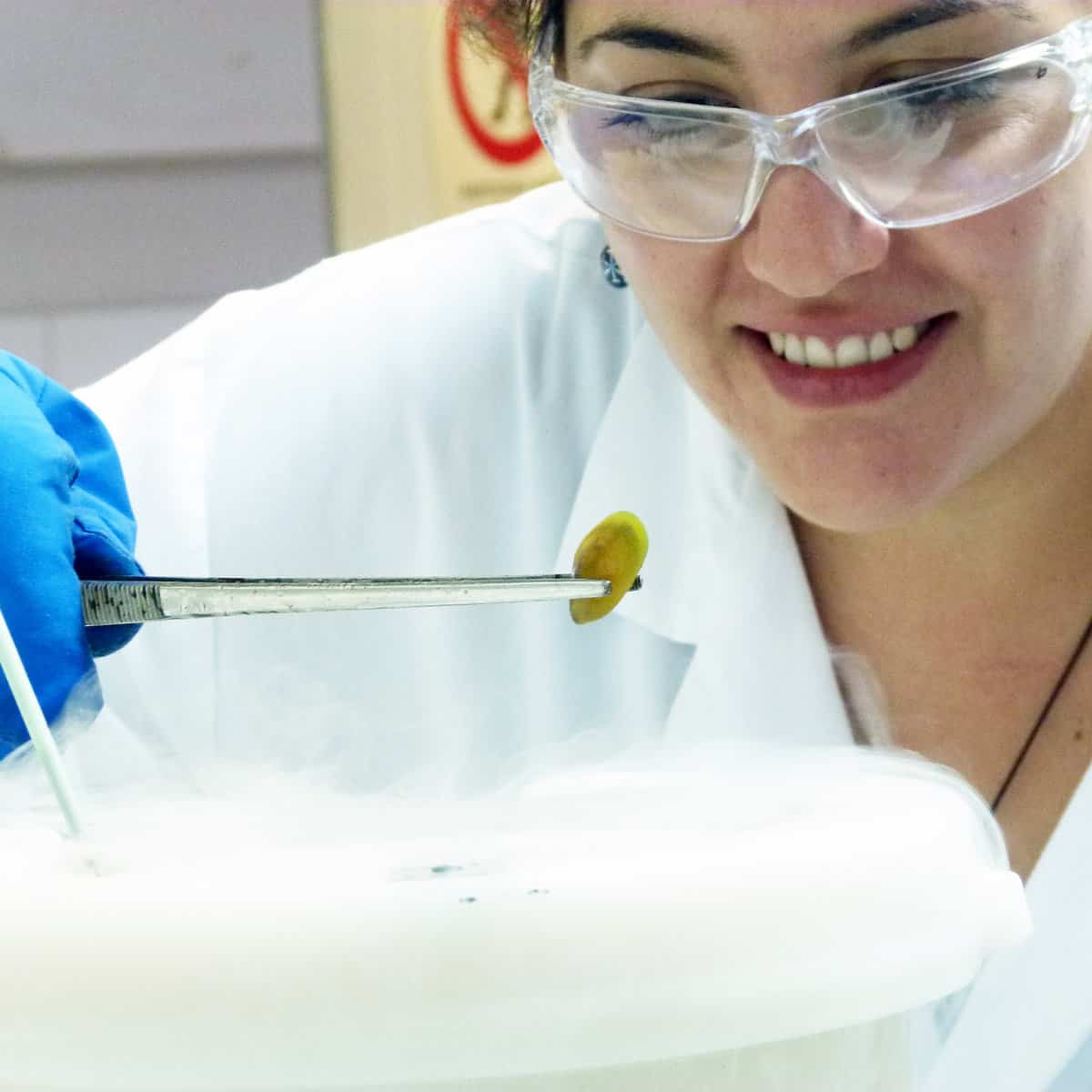 Below we’ll outline some of the latest research produced through this research programme, and explain how it links to our overarching objective to support the growth and resilience of New Zealand’s shellfish aquaculture industry.

Definition: Thermotolerance – The tolerance of shellfish to changes in seawater temperature that fall outside of their normal ‘comfort zone’, either short- (e.g. marine heatwaves) or longer-term (e.g. chronic exposure to elevated temperatures across months to years).

Cawthron researchers have been conducting studies across a range of New Zealand’s aquaculture species including green-lipped mussels, oysters and paua.

Our researchers have been developing a range of tools that can be used to detect stress in green-lipped mussels before mortality sets in – these tools are useful for scientists to evaluate which seawater temperatures are actually stressful for the shellfish, but we’re also focusing on portable, easy-to-use devices that could be used by marine farmers in hatcheries and on farms.

This mussel thermotolerance research is being completed on a range of life stages (e.g. larvae, spat, juveniles and adults). With mussels we’re learning that an important tipping point temperature exists at approximately 26°C, and heavy adult mussel mortality sets in if this temperature is maintained for several days.

In general, however, adult mussels held at 24°C begin to die after four months and reproductive potential decreases to very low levels. Those held for more than four months at 21°C experience significant stress and reproductive performance is impacted, but most individuals can survive and breed. Read more about this study that explores the effect of temperature stress on GreenshellTM mussels > This indicates that warmer ocean temperatures are likely to affect both performance and reproduction of adult mussels, and this will have consequences for both farmed kūtai and our wild populations.

However, a recent experiment led by Cawthron’s Dr Norman Ragg and Dr Jess Ericson has indicated that different selectively-bred ‘families’ (groups of mussels with known genetic history) respond quite differently to heat stress in terms of both survival and their immune response, and that because thermotolerance is influenced by genetics, there is potential for both natural selection and aquaculture breeding programmes to promote strains with increased resilience to marine heatwaves.

Norman and his team wanted to explore whether they could find methods to capitalise on the natural thermotolerance of New Zealand’s green-lipped mussel, Perna canaliculus, and develop breeding practices that improve the resilience of mussel populations to future marine heatwaves and warming oceans.

The studies found that the offspring of resilient parents were more tolerant of chronically elevated temperatures. But the researchers didn’t stop there, they went on to examine the potential for further improvement through transgenerational plasticity. This approach looks beyond genetics and considers whether a parent’s experiences can influence the performance of their offspring. The preliminary findings are exciting, suggesting that selecting thermotolerant parents and ‘training’ them under heatwave conditions can produce even more tolerant baby mussels. It’s not simple – there are other complex interactions like the duration of the heat stress that impact this response, but the combined data still suggests that there is significant capacity within today’s green-lipped mussels to respond to rapidly rising summer temperatures with good breeding programmes in place, and the power of transgenerational plasticity may be harnessed to further enhance thermotolerance of mussels during their vulnerable early life stages.

Another study into emersion and relative humidity study led by Cawthron’s Dr Paul South and Dr Natalí Delorme has indicated that occasional short-term heat stress may ‘train’ mussels to raise their thermotolerance, but prolonged heat stress is likely to weaken mussels and lower their tolerance to additional heat shocks. Cawthron is currently scoping further research that will investigate the potential of ‘conditioning’ for thermotolerance and we look forward to sharing results in the future.

Read more about this study into emersion and relative humidity here >

Cawthron shellfish physiologist Dr Lizenn Delisle has been studying Pacific Oyster (Crassostrea gigas) Mortality Syndrome (POMS) which is a species-specific summer mortality syndrome. Her research has aimed to identify pathogens associated with severe mortality episodes in Pacific oysters and understand how these infections spread by analysing field samples and conducting laboratory experiments. The hope is that better understanding host/pathogen interactions might help the aquaculture industry to better mitigate and respond to these threats.

“Since 2010 there have been a number of mass mortality episodes associated with OsHV-1 recorded in New Zealand, but we haven’t had a great understanding of how the disease spreads or the role of the unique oyster microbiota (ecological communities of microorganisms including bacteria) here in New Zealand.”

The findings of Lizenn’s study are important for understanding POMS in a New Zealand context.

“We learned that virus infection in NZ takes more time to establish in oysters compared to the data collected in Europe and the associated mortalities are delayed (120 h in NZ vs 72h in Europe).”

The study also evidenced that the oysters resilient to POMS display a higher microbiota diversity than the vulnerable oysters that probably help them to overcome the disease. Microbiota comparison between resilient and vulnerable oysters during viral infection allowed the identification of bacteria families that could contribute to mortalities (Psychrobium, Mycoplasma or Marinomonas) or be beneficial for oyster survival (Roseobacter, Umboniibacter).

“Essentially, if we know that both virus and bacteria growth and spread are influenced by a range of environmental factors, but particularly water temperature and ocean acidification, and both of these factors are clearly linked to climate change, this is going to be an increasing threat and one we need to understand and prepare for.”

“Promisingly, there are many interesting factors that appear to influence disease resistance, like genetics and microbiota diversity, so there are avenues for us to pursue to try and mitigate and manage this threat too that are exciting.”

This study is likely to be published early in 2022.

Definition: Histopathology – the study of microscopic changes in tissues caused by stress and disease.

Another recent Cawthron Institute study led by emerging Cawthron researcher Joanna Copedo explores environmental stressors for pāua. Joanna has recently started her PhD candidature within the Aquaculture Biotechnology Research Group at the Auckland University of Technology as part of a Cawthron-supported transition from an aquaculture technician towards a research-focused career path. Joanna has been studying the New Zealand Pāua (Haliotis iris) using histopathology tools, aiming to better understand what factors, such as digestive tract condition and food quality, might be associated with poorly-understood slow growth (‘stunted’) populations that appear to be increasingly common and impact both customary and commercial pāua fishing.

The areas where pāua live (shallow and rocky coastal regions) are vulnerable to fluctuating environmental conditions which in turn affects the health of the pāua. In this study, a variety of different types of tissue were sampled and studied, from gills and digestive tracts to organs, and image analysis was conducted on the digestive tubules using software to quantify damage to tissue and changes caused by stressors such as low access to food and high levels of sedimentation.

The preliminary results show that even within a population of pāua exposed to the same environmental conditions, there is a difference in how individual pāua respond, indicating that there are other factors influencing health. However, Joanna said the study demonstrated that these two key stressors – limited access to food and high-sedimentation – do appear to have altered the digestive systems of pāua in a way that negatively impacts on their health and development.

“The next steps for my research include working to understand how those negative effects might be compounded by climate change, in order to protect pāua populations in the wild and on marine farms.”

Climate change projections for Aotearoa New Zealand have indicated that seawater temperatures will increase by 1 – 3°C over the coming 80 years, which means that summer sea-surface temperatures may regularly exceed 24°C in some areas of NZ. We need to remember that many other factors can also increase or decrease animal thermotolerance. Environmental stressors such as low food levels, ocean acidification, freshwater runoff and toxic algae may also interact to affect heat tolerance.

Shellfish stress and survival now and in the future clearly depends on a complex interplay of many factors. Our target aquaculture species have innate resilience mechanisms that can be harnessed if effective research, husbandry and breeding strategies are applied, throwing down the gauntlet for scientists and industry to develop mitigation strategies that give us the best chance of securing our shellfish industries in an uncertain high CO2 future.