Cawthron holds significant expertise in improving the health, welfare and biosecurity of our aquatic animals to the benefit of New Zealand’s economy and environment.

We provide services to a range of aquaculture industry clients in New Zealand and the Pacific including aquatic disease diagnostic commercial services, pest and disease risk assessments and pharmaceutical trial services. We also lead a range of programmes of research and development that produce novel technology and solutions that protect and grow New Zealand’s aquaculture industry.

In addition to leading the national Shellfish Aquaculture Research Platform, Cawthron Institute also leads a Ministry of Business, Innovation and Employment-funded Aquatic Animal Health (AAH) Research Programme.
There is a symbiotic relationship between the two research programmes as they share complementary objectives, interests and resources.

As we explained in the Cawthron case study “Climate change and shellfish aquaculture”, many AAH issues are also affected and or compounded by changing environmental conditions, and many of these issues have potential solutions through the development of new breeding, hatchery, husbandry and farm management practices and technologies. As such, Cawthron’s AAH research has broad implications for all of our shellfish research.

Below we’ll summarise some recent Cawthron studies focused on the health of shellfish in New Zealand. 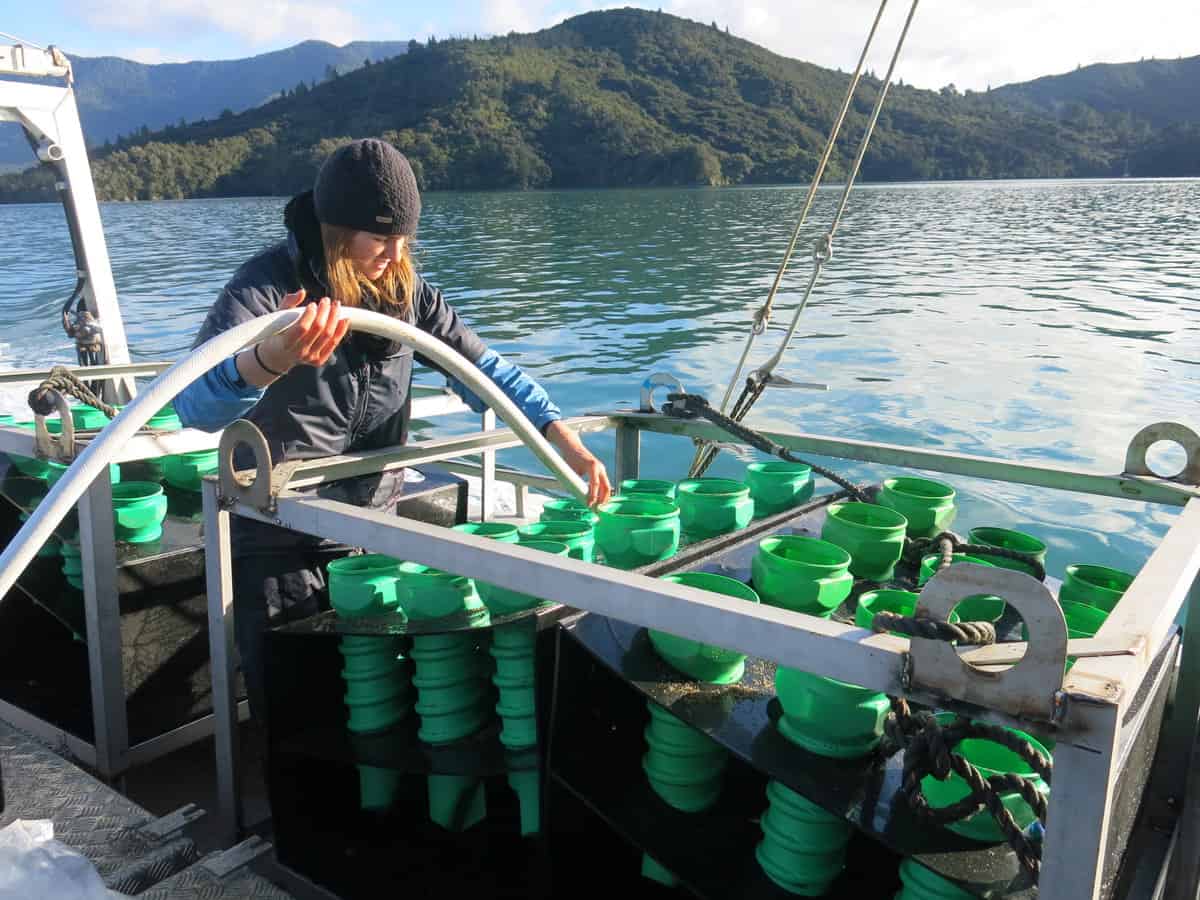 1. The role of bacteria in aquatic animal health

The study, published in the journal Frontiers in Microbiology has revealed that bacteria present in microalgae-based feed significantly affects the health and mortality of developing oyster larvae in the hatchery environment.

The Pacific oyster Crassostrea gigas is the world’s most cultivated oyster and seed supply is heavily reliant on hatchery production where recurring mass mortality events are a major constraint. Outbreaks of bacterial infection via microalgal feed have long been linked to these mortalities.

This new study, funded by Cawthron’s Shellfish Aquaculture Platform, aimed to assess the role of bacteria in oyster larvae health and development through exposure to poor quality microalgae feed and rearing seawater.

During the study, researchers used a molecular technique called metabarcoding to identify the different types of bacteria in the samples of larvae tissue, seawater and microalgae feed. The bacteria-rich microalgae was fed to 11 day-old oyster larvae at two feeding rations for 96 h, followed by a recovery period.

“Globally, Pacific oyster production has a value estimated at US$ 1.24 billion a year, and hatchery production of oyster spat is really the only sustainable way to supply seed, so we want to understand and prevent hatchery mortality events to increase industry productivity,” Dr Vignier said.

“The main implication from this study for oyster farmers and hatcheries is that if you have a bad batch of microalgae with problematic bacteria, overfeeding larvae will make the problem worse, and reduced feeding could mitigate the impact.”

Read more about this study here >

2. Understanding the effects of the exotic pathogen Bonamia ostreae on the NZ native flat  oyster

Another recent study led by Cawthron’s Dr Zoë Hilton explores the effects of the exotic pathogen Bonamia ostreae on the NZ native flat oyster and provides important new insight into our approach to selective breeding for resilience.

In 2015 the exotic parasite Bonamia ostreae was detected for the first time in NZ and the Southern Hemisphere. This triggered the closure of all NZ flat oyster farms to limit the spread of B. ostreae and protect uninfected wild populations.

At that time Cawthron’s research turned towards understanding the effect of B. ostreae on the flat oyster. Samples from the last farms de-stocked in November 2017 were examined using histology tools and PCR.

Zoë said one aim was to compare the effect of B.ostreae on the flat oyster in New Zealand to the observed effects of other similar parasites on oyster populations around the world, in the hope that we could draw on those findings in New Zealand.

“One key finding from our research is that there was a striking difference in the susceptibility to infection amongst individual oysters, indicating that genetic factors contribute to resilience against the parasite.”

Zoë said this finding obviously informs future options for farming and potential selective breeding of flat oysters for resilience to B. ostreae. 3. Understanding the effects of environmental contaminants on New Zealand’s shellfish

Definition: Biomarker – A naturally occurring molecule, gene, or characteristic by which a particular pathological or physiological process, disease, etc. can be identified.

The aim of the PhD was to determine whether or not green-lipped mussels are a suitable species for environmental hazard assessment. This was done through a comparative study looking at the biological effects of contaminants of emerging concern towards green-lipped mussels and the Mediterranean blue mussel, Mytilus galloprovincialis.

The idea behind conducting ecotoxic hazard assessments is to spot potentially problematic contamination before it becomes a major aquatic health issue. Biomarkers are helpful because they help us to identify threats early.

Contaminants that can impact shellfish range from human-made chemicals through to heavy metals. 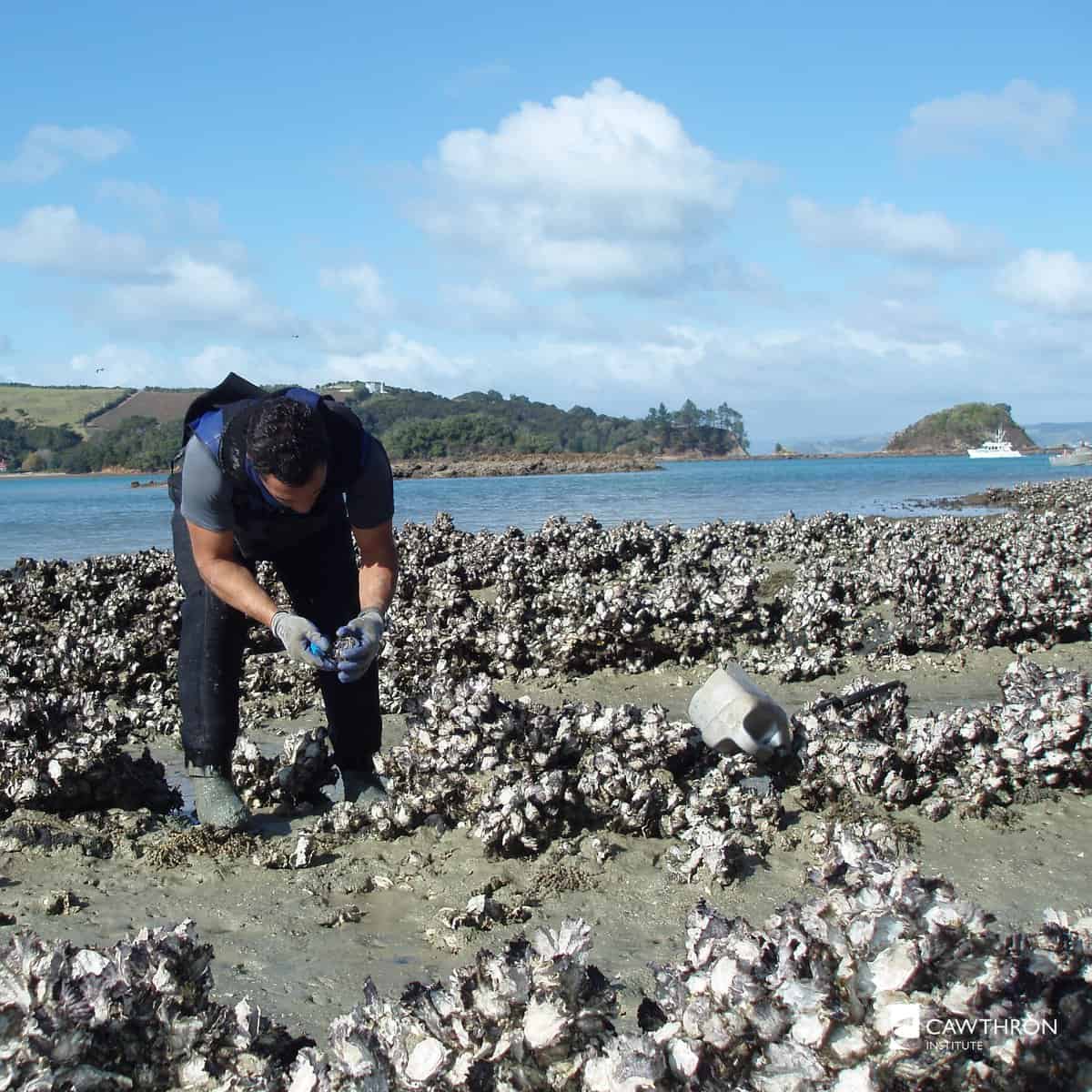 Two particular contaminants, copper and benzo[α]pyrene, were found to have a significant impact on the mussels in this study, indicating that further research should be done into their toxicity.

Camille said that in New Zealand there is a desire to use local, native species for ecotoxic hazard assessments rather than internationally standardised species for the characterisation of environmental hazards.

“This means that we are now able to develop tools and methods for these assessments that can help us mitigate the threats posed by contaminants.”

Cawthron shellfish physiologist Dr Lizenn Delisle has been studying Pacific Oyster (Crassostrea gigas) Mortality Syndrome (POMS) which is a species-specific summer mortality syndrome. Her research has aimed to identify pathogens associated with severe mortality episodes in Pacific oysters and understand how these infections spread by analysing field samples and conducting laboratory experiments. The hope is that better understanding host/pathogen interactions might help the aquaculture industry to better mitigate and respond to these threats.

You can read more about Lizenn’s research into POMS here in the Cawthron case study ‘Climate change and shellfish aquaculture’.

Definition: Histopathology – the study of microscopic changes in tissues caused by stress and disease.

You can read more about Joanna’s research in the Cawthron case study ‘Climate change and shellfish aquaculture’.